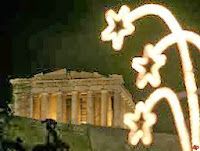 The festival period lasts from 30 November to 6 January on the Greek calendar. 25 and 26 December is a public holiday in Greece. Christmas is known as Christougena (Χριστούγεννα) and people wish 'Merry Christmas' to each other saying 'Kala Christougana'. Most families set up Christmas trees and shops have decorations and lights. Presents are placed under the Christmas tree and are opened on 1 January, St Basil’s Day. In Greek tradition, Basil’s [of Caesarea] name was given to Father Christmas and he is supposed to visit children and give presents on 1 January [when Basil’s memory is celebrated], unlike other European traditions, where this person is Saint Nicholas and comes every Christmas.

Across the country the children are going from house to house to tell the carols on Christmas Eve, New Year's Day and Epiphany, while at 12.00 midnight they light fires to melt away the goblins, mainly rural custom. The Christmas meal usually includes lamb or pork and desserts such as kourabies and melomakarona. Other Christmas and New Year's traditional sweets are baklava, kataifi and diples. On Christmas Eve on December 24 and 23 housewives make the Christmas cake with a cross in the middle and avgokouloures which are subsequently offered to the elderly and children. People go to church early the morning on Christmas Day. On Christmas morning, after the church, they prepare the ‘’pork batches’’, served with wine and the ‘’thick’’ which a kind of soup with boiled pork served with plenty of lemon. Pork food is one of the caracteristics of Greek Christmas. 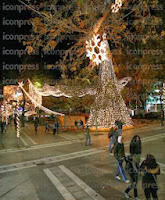 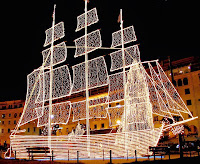 In some Greek cities and ports like Thessaloniki, Volos, Patra, the Greek Islands etc, it is a tradition to decorate a Christmas boat.

Epiphany (Comon Greek: ἐπιφάνεια, epiphaneia, "manifestation", "striking appearance") or Theophany (Ancient Greek (ἡ) Θεοφάνεια, Τheophaneia meaning "vision of God"), which traditionally falls on January 6, is a Christian feast day that celebrates the revelation of God the Son as a human being in Jesus Christ. Western Christians commemorate principally (but not solely) the visit of the Magi to the Baby Jesus, and thus Jesus' physical manifestation to the Gentiles. Eastern Christians commemorate the baptism of Jesus in the Jordan River, seen as his manifestation to the world as the Son of God. 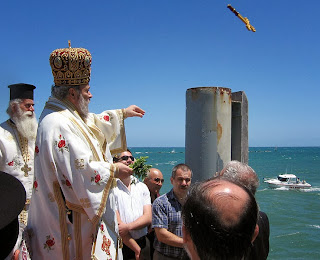 In Greece, Cyprus and the Greek diaspora throughout the world, the feast is colloquially called the "Phōta" (Greek: Φώτα, "Lights") and customs revolve around the Great Blessing of the Waters. It marks the end of the traditional ban on sailing, as the tumultuous winter seas are cleansed of the mischief-prone "kalikántzaroi", the goblins that try to torment God-fearing Christians through the festive season. At this ceremony, a cross is thrown into the water, and the men clamour to retrieve it for good luck. The Phota form the middle of another festive triduum, together with Epiphany Eve, January 6 (and eve of January 5), when children sing the Epiphany carols, and the great feast of St. John the Baptist on January 7 (and eve of January 6), when the numerous Johns and Joans celebrate their name-day. 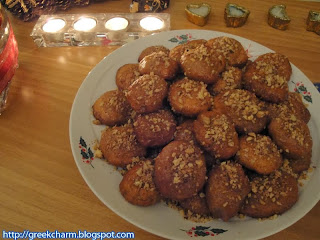 For the syrup
For the topping
INSTRUCTIONS
1. Preheat oven at 350 degrees F.
2. In a large bowl mix the olive oil, cognac or brandy, orange juice, sugar, 1 tsp cinnamon, and orange peel.
3. In another bowl sift flour and mix with the baking powder and baking soda. Add gradually to the olive oil mixture, while stirring with a wooden spoon. Once you have added all the flour, knead the dough and add some more flour if needed.
4.  Roll the dough in little balls about the size of a walnut. Using your fingers press one side of the ball on a grater flattening like a small pancake and then fold over so that the cookie is in a oval shape, with the top having the design of the grater. This is done so that the honey will be better absorbed as opposed to just shaping the cookie in a solid oval shape.
5. Place the cookies on a cookie sheet lined with parchment paper. Bake for about 25 minutes. Bake the rest of the cookies.
6. Once all the cookies are baked, flip them so that the bottom part is facing up, let them cool down.
7. For the syrup bring to a boil the honey, syrup and water and let it boil for 5 minutes. Remove the foam.
8. Once the syrup is boiled, while it is hot, pour it over the cookies, making sure all cookies are covered with syrup. Let the cookies sit for at least 2 hours, than turn them over and let them sit some more. *
* Some people prefer to do the opposite: Make the syrup and let it cool off, than pour the syrup over hot cookies, instead of letting them cool down. Another way is to place the melomakarona in the pot with the syrup for a few minutes and removing them with a slotted spoon.
9. Mix the walnuts with cinnamon and sprinkle over the melomakarona.
10. Place the melomakarona on a large platter.
You can also substitute the orange juice and brandy with beer. Instead of using ½ cup brandy and ½ cup orange juice, use 1 cup beer.
Makes about 50 pieces. 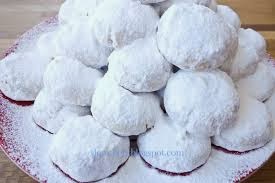 Vasilopita is the Greek New Year's cake. Vasilopita is associated with Saint Basil's day on January 1 in Greece.
On New Year's Day families cut the Vasilopita to bless the house and bring good luck for the new year.
It is traditional to bake a coin into the Vasilopita (St. Basil's cake). The one who receives the coin is considered to be especially blessed for the year. A piece of cake is sliced for each member of the family and any visitors present at the time. Slices are also cut for various other people or groups, depending on local and family tradition. They may include St. Basil and other saints, the Virgin Mary, the Church and the poor.
Vasilopita is made in honor of a beautiful act of charity by St. Basil to the poor and needy of his flock. In order to insure that the needy would have money for life's necessities, and knowing that the needy were also proud people, St. Basil had the ladies of his church bake sweet bread with coins baked into them. In this way he could give them money without demeaning them at all. 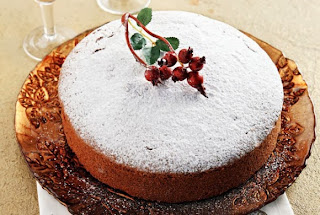 Preparation
•  In a large tub pour half a cup of lukewarm milk and dissolve the yeast in it. Add ½ cup flour and stir to mix. Cover with a towel and let rise in a warm place for about an hour.
•  While the dough is rising, beat the egg yokes with the sugar in an electric mixer or food processor and set aside. Beat the egg whites into a meringue. To the risen dough, add yoke/sugar mixture, the remainder of the milk, the meringue, butter, mahlepi and zest. Knead until all is well mixed, adding the remainder of the flour a little at a time so the dough won't be too tight. Shape the dough into several balls, place in a bowl, cover it with a towel and leave in a warm place for about 3 hours until it doubles in size.
•  Knead the dough for 5 minutes more and place in a large round oiled pan (or two smaller ones) and leave covered in a warm place until it doubles in size again.
•  Before placing in oven, beat the yoke of 1 egg with a teaspoon of water and brush it on the dough with a pastry brush. Then, using the blanched almonds, form the "new" date on the top of the dough. Bake for about 30/40 minutes, or until Vasilopita looks well browned. 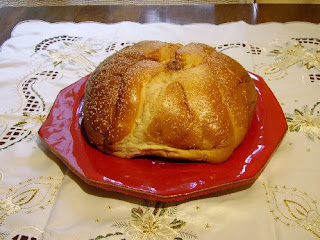 Christopsomo, or Christ's Bread, is considered a sacred tradition in many Greek Orthodox homes, and the care with which it is made is said to ensure the well-being of the home in the year to come. Only the purest and most expensive ingredients are used. The bread is often decorated with pieces of dough formed into representations of the family's life (boats, animals, etc.). Ingredients are for simple loaves, and directions for a decorated loaf as shown at left can be found below.

Preparation tip: Use a mortar and pestle to crush the anise seed. 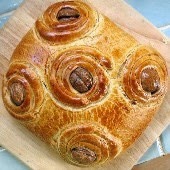 Decorate Your Christmas Bread: At step 6, pull a fistful of dough from each loaf. Pat the dough back into shape to rise. When risen, use the small pieces of dough to create designs: roll them out into strips and coil around whole walnuts pressed into the top in the shape of a cross, or make them into the shapes of your choice and place on top of the loaves. Continue with the recipe. Brush with beaten egg instead of milk to get a brighter glaze.